TAKE NOTE: this section is under updating, so you can see only a draft copy, to be implemented also   with some  information already avalilable in the Italian version of this web site.  Many of the covers illustrating the National Italian Plan 1985-2004 are ALREADY available. Click on the active links, choosing the appropriate expedition year, in the following. We invite the readers to contact the web master (from the HOME page) if they want to send other information or corrections.

We must thanks Mark Jurisich and Fabio Vaccarezza who are developing this section.

Mark Jurisich has  completed a detailed monograph on "Italian Antarctic Expeditions 1957-1995". Now it is available,

click HERE to read a short comment and how to order it. (We suggest to use your BACK button to come back to this page, after the vision of the Monograph announcement).

If you wish to read some basic information on Antarctica click HERE.

If you wish to see the photos of some ships which were used in Italian expeditions, click HERE.

First Italian expedition to Antarctica was made during IGY 1957-58 by the Institute of Polar Geography under Professor Silvio Zavotti. (An article by Zavotti in UK Polar Post No.85 lists the expeditions). Since 1957, and prior to their first logistically independent expedition in the 1985-86 summer, support for Italian activities in Antarctica was largely provided by NZ with expeditions centered at Scott Base. The links are between Italy’s Alpine Club & National Research Council (CNR) and the Antarctic Division DSIR of NZ.

Franco Faggioni commenced seismological measurements and observations at Scott Base for 12 months during IGY.  Mail is not recorded.

They looked for a site for a permanent base, but after bad weather they only stayed one day. 1500 covers were produced.

Carlo Mauri visited the Dry Valleys and Scott Base as a guest of NZ, whilst there he climbed Mt Terror.  He also took part in the ascent of Mt Erebus with several New Zealanders.

Four members were invited to work at Scott Base:

Mauri & Ollier worked with the Victoria University of Wellington and the NZ Geological Survey parties in the Boomerang Range, while Manzoni & Piussi worked at NZ Vanda Station in the Dry Valleys.

Two members from the Genoa Institute of Oceanography also undertook an expedition that year.

Organized by entrepreneur Giovanni Aimone Cat, who also built the 16m length sailing vessel MV San Giuseppe Due with the help of the Italian Navy.  The expedition had six members, 3 crew and 3 expeditioners:

San Giuseppe Due then departed Decepcion Island on 19 Jan 70 for Argentine Antarctic base Almirante Brown where she stayed 22-25 Jan, then she went to USA Palmer Station 25-28 Jan and returned to Almirante Brown to wait for good weather to cross the Drake Passage. Some of the crew abandoned ship at Almirante Brown and flew home. The Italian Navy then provided two navigators F Zarattini & S Di Mauro and aircraft pilot D Trentin who all arrived on the icebreaker ARA General San Martin on 19 Feb and were transferred aboard. San Giuseppe  Due then sailed into Port Stanley on 4 Mar 70 and finally returned to Anzio on 21 Nov 70.

The only known covers from the voyage (perhaps 10 according to the commander of the vessel) are on light grey paper impressed in maroon with “S.Giuseppe Due / Roma”.

Dr M Manzoni and Prof Carlo Stocchino of the Institute of Oceanography at Genoa returned to Scott Base to prepare for future activities.

Five members departed Italy on 22 Nov 73 on board San Giuseppe Due, bound for NZ:

They arrived at Lyttelton on  ………., departed on  ………….. and arrived at Scott Base on …………. where they were joined by Colin Monteath from the NZ Dept of Scientific & Industrial Research. The party undertook research in South Victoria Land around Vanda Station in the Dry Valleys. About 1000 covers were produced.

That same year there was another voyage of the San Giuseppe Due. Master was Captain Giovanni Aimone Cat plus a crew of 4 sub officers from the Italian Navy:

there was a 15 man expedition led by Professor Renato Cepparo in the Norwegian vessel Rig Mate.  Party was made up of climbers and scientists; one group stayed on King George Island, another group landed on Wiencke Island to climb mountains.

The 3rd CNR team operated in the Trans Antarctic Mountains during November and December 1976. The party comprised four Italian and one NZ DSIR members:

The party were in the Wright Valley near Vanda Station.

A party of five lead by Cdr.Flavio Barbiero aboard an inflatable boat attempted to cross the Drake Passage to gain King George Island. They were unable to cross the passage and were rescued by a chilean tug.

Flavio Barbiero was deputy leader with Cepparo expedition and discovered, on the King George Is.  remains of a fossilized forest.

No mail is recorded from this travel. But in Milan on the february 17,1978 was used a special souvenir postmark (JPEG: BARBIERO)

No further details are available about this expedition.

See also the photos and maps of Baya Terra Nova Base and Dome C, clicking HERE.

Vessel returned to Lyttelton on 27 Feb 86.

Vessel MS Finnpolaris departed Genoa on 15 Oct 86 to locate a site for a permanent station in Antarctica. The vessel visited Lyttelton 3 Dec 86 then went to Scott Base. Mail with Finnpolaris date cachets 19 Dec 86 or 21 Dec 86 may be the dates of arrival and departure at Scott Base. Finnpolaris was then in Lyttelton port on 5 Jan 87. Helicopters NZ provided support for transit of team from Scott Base to Terra Nova Bay camp site where the base was established and for further exploration.

About 200 items were flown to Scott Base on 20 Jan 87 and mailed from there that day. Some mail with date cachet MS Finnpolaris 26 Feb 87 has an arrival cancel Lyttelton 26 Feb 87, possibly brought back on Soviet vessel Profesor Vize, or Operation Deep Freeze vessel MV Green Wave.

Two researchers from the Instituto di Fisica dell ’Atmosfera, Dall ‘Oglio de Bernardis, left the Terra Nova base camp in November 86 for 3 months searching for station sites for erection of an astronomical telescope. No mail is recorded from the journey.

There was a large quantity of mail posted at Lyttelton on 2 & 3 March 87, shortly after MS Finnpolaris reached there. Vessel arrived back in Genoa port on 8 April 87.

Mail with MV Barken  cachets is cancelled at Lyttelton on 24 Jan 89, it may be the return date for the vessel.

NR Ogs Explora returned to Lyttelton on 28 Feb 89. Most mail is cancelled Lyttelton 1-3 Mar 89. Some cacheted covers are known cancelled San Francisco 9 Mar 89, so it may have also transited there on the way back.

Some SPV Barken covers are cancelled at Scott Base on 6 Feb 90.

M/n Italica arrived at Scott Base on 10 Jan 92.  Vessel returned to Lyttelton 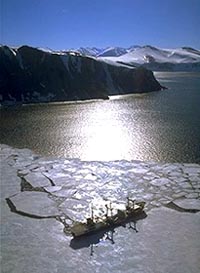 We thank very much Mr. Steven McLachlan who gave us the possibility to show his web sites:

on the Mario Zucchelli Station (ex baia TerraNova) at:  http://www.newzeal.com/theme/bases/IT/zucchelli.htm

on Italian vessel ITALICA at:  http://www.newzeal.com/steve/Ships/italica.htm

We invite the collctors and Atarctica lovers to visit a very nice web site on the Ross Dependency (New Zealand), full of  interesting covers:

See also the Italian section of his website at:

and Italian Philatelic FORUM: topic on Antarctic base: