Espionage stamps, which reproduce the normal stamp issues of an enemy state, are produced clandestinely by a country at war. They can be used for secret operations, for propaganda, or for communication. The Cifr has

introduced the study of this exciting field in Italy. 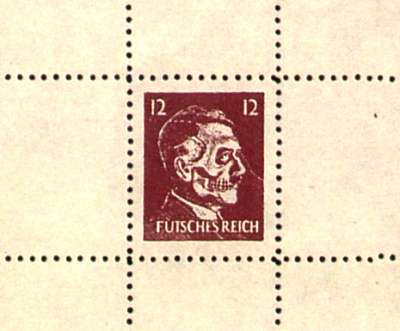 Shown: at the right a post-war fraud of the "Hitler skull" stamp, along with a single original "Hitler skull" prepared by the American Secret Service (OSS, Office for Strategic Services) in Rome during the war, (at left).

Click on Next button to read the article "The story of French "SPY" stamps.

Go to the Italian pages to see more samples and come back here with your "back button":  click HERE to first Italian page and then "surf" among many pages with spy stamps of different Countries.


We suggest this link to Cornflake Operation to see other information on SPY stamps : http://www.hgitner.com/oss.html