The TRS "3rd Reich Stamps" group gave to Cifr its award in November 2002.

The Web Masters and Designers Association gave its golden award in February 2003.

Cifr was inserted in roll of honor of Italian philately by FSFI in May 2003.

Our Society participated in the first, second and third international contest held by FIP (Fédération Internationale de Philatélie) to evaluate the philatelic communication via the Internet.

A team of  judges who are experts in philatelic literature ranked some hundred participants, and the official announcement of "THE BEST  PHILATELIC SITES" was done during the China Expo in Peking in August '99, in  Madrid in October 2000 and in Copenhagen during October 2001. The first winner was Joe Luft's famous site, a site full of useful information and from which it is possible to link to more than 2,000 other sites, while in 2000 the winner was the Scout on stamps society international,  the Hawaiian History Study group won in 2001 edition and this year the Slania stamp Danish site, which you can surf at:

Our Cifr site was considered very good, and was awarded TWO STARS in 1999 and upgraded to THREE STARS in 2000/2001/2002! Only one other Italian site was prized by the commission: the site of the Italian magazine "Cronaca Filatelica" in the first contest and "Italian Federation" and the publisher Vaccari in the second and other three in 2001 edition. Best compliments! We can  show the FIP logo on our pages in recognition of our success during the last three years!

In fact our Society is the only Italian philatelic group which treats on the Internet the topic of Resistance and the only which has developed more than 40 virtual pages on WW II, in Italian and in English.

But the Cifr decided to go ahead  with the introduction of a new interesting topic "The Italian peace keeping missions in the world", so in the 2000 contest the judges upgraded their rate from 2 star site to 3 star site, in recognition of our efforts in  favour of philately.

The high level pages of POW camps during II WW gave us the chance to maintain our high position also in 2001 and 2002. 72 pages of exhibit are a great effort indeed, both in Italian and in English!

If you want to browse all the valuable philatelic sites which were ranked by judges, go to the LINK page and click on FIP address or on that of of Computer Study Group. Both link to all the other locations of Magazines, Dealers, Government, and official sites. Enjoy surfing the best of the philatelic sites!

In July 2003 the F.I.P. informed Country Federations the 2003 contest for "THE BEST PHILATELIC SITES" will be not held. The same contest is foreseen for the 2004.

AWARD OF THE WEB MASTERS AND DESIGNERS ASSOCIATION 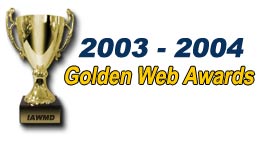 Hall of fame in Italian Philately for Cifr:

of Italian Federation FSFI Piero Macrelli on the 10th May 2003.

During  Temex international philatelic fair in Buenos Aires, our magazine "la Voce del Cifr", first time in one international contest, won a large silver medal in the "periodical literature category". There were representatives from 22 Countries with 400 magazines and other paper works.

On Saturday Nov., 26 2005, during the international philatelic fair of  "Veronafil 105^ " in the congress room "Donizzetti", with the presence of the  president of F.S.F.I.  Piero Macrelli and the vice president  Bruno Crevato Selvaggi , our Society  "Centro Italiano Filatelia Resistenza" was awarded with a diploma and gold medal as the best Italian philatelic Society for its activity in the historical/philatelic research during 2004 year.